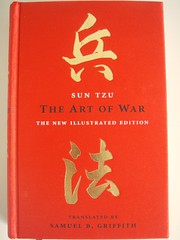 II-3: Victory is the main object in war. If this is long delayed, weapons are blunted and morale depressed. When troops attack cities, their strength will be exhausted.

II-4: When the army engages in protracted campaigns the resources of the state will not suffice.

II-7: For there has never been a protracted war from which a country has benefited.

III-1: Generally in war the best policy is to take a state intact; to ruin it is inferior to this.

III-4: Thus, what is of supreme importance in war is to attack the enemy’s strategy

III-5: Next best is to disrupt his alliances.

III-10: Thus, those skilled in war subdue the enemy’s army without battle. They capture his cities without assaulting them and overthrow his state without protracted operations.

III-12…17: Consequently, the art of using troops is these: When ten to the enemy’s one, surround him; When five times his strength, attack him; If double his strength, divide him. If equally matched you may engage him. If weaker numerically, be capable of withdrawing. And if in all respects unequal, be capable of eluding him, for a small force is but booty for one more powerful.

IV-1…5: Anciently the skillful warriors first made themselves invincible and awaited the enemy’s moment of vulnerability. Invincibility depends on one’s self: the enemy’s vulnerability on him. It follows that those skilled in war can make themselves invincible but cannot cause an enemy to be certainly vulnerable. Therefore it is said that one may know how to win, but cannot necessarily do so. Invincibility lies in the defense; the possibility of victory in the attack.

IV-11: And therefore the victories won by a master of war gain him neither reputation for wisdom nor merit for valor.

V-21…22: Therefore a skilled commander seeks victory from the situation and does not demand it of his subordinates. He selects his men and they exploit the situation.

VI-1…2: Generally, he who occupies the field of battle first and awaits his enemy is at ease; he who comes later to the scene and rushes into the fight is weary. And therefore those skilled in war bring the enemy to the field of battle and are not brought there by him.

VI-4…5: When the enemy is at ease, be able to weary him; when well fed, to starve him; when at rest, to make him move. Appear at places to which he must hasten; move swiftly where he does not expect you.

VI-13: When I wish to avoid battle I may defend myself simply by drawing a line on the ground; the enemy will be unable to attack me because I divert him from going where he wishes.

X-18…20: If the situation is one of victory but the sovereign has issued orders not to engage, the general may decide to fight. If the situation is such that he cannot win, but the sovereign has issued orders to engage, he need not to do so. And therefore the general who in advancing does not seek personal fame, and in withdrawing is not concerned with avoiding punishment, but whose only purpose is to protect the people and promote the best interests of his sovereign, is the precious jewel of the state. Because such a general regards his men as infants they will march with him into the deepest valleys. He treats them as his own beloved sons and  they will die with him.

X-21: If a general indulges his troops but is unable to employ them; if he loves them but cannot enforce his commands; if the troops are disorderly and he is unable to control them, they may be compared to spoiled children, and are useless.

XI-29: Seed is the essence of war. Take advantage of the enemy’s unpreparedness; travel by unexpected routes and strike him where he has taken no precautions.

XI-33: Throw the troops into a position from which there is no escape and even when faced with death they will not flee. For if prepared to die, what can they not achieve? Then officers and men together put forth their utmost efforts. In a desperate situation they fear nothing; when there is no way out they stand firm. Deep in a hostile land they are bound together, and there, where there is no alternative, they will engage the enemy in hand to hand combat.

XI-60…61: The doctrine of war is to follow the enemy situation in order to decide on battle. Therefore at first be shy as a maiden. When the enemy gives you an opening be swift as a hare and he will be unable to withstand you.

XII-15…16: Now to win battles and take your objectives, but to fail to exploit these achievements is ominous and may be described as ‘wasteful delay’. And therefore it is said that enlightened rules deliberated upon the plans, and good generals execute them.

XIII-3: Now the reason the enlightened prince and the wise general conquer the enemy whenever they move and their achievements surpass those of ordinary men is foreknowledge. What is called ‘foreknowledge’ cannot be elicited from spirits, nor from gods, nor by analogy with past events, nor from calculations. It must be obtained from men who know the enemy situation.